Otitis media-interna are the most common causes of peripheral vestibular disease seen in dogs and cats, but there is little information in ferrets. An 8-year-old, neutered female ferret was presented because of an acute onset of a left-sided head tilt. Neurological examination was compatible with peripheral vestibular syndrome. Computed tomography (CT) confirmed the presence of otitis media. CT is a useful, quick and practical technique to rule in or rule out the presence of material in the middle ear in the ferret.

An 8-year-old, neutered female ferret was admitted with a history of an acute onset of a non-progressive head tilt. The owner reported no previous history of trauma event neither toxins exposure. On initial presentation, the ferret was bright, alert and responsive with a mild left ear discharge. No abnormalities of heart rate, breathing and temperature were observed. The neurological examination revealed left head tilt and incoordination due to left drifting. A presumptive diagnosis of peripheral vestibular syndrome due to OMI was established. The diagnostic plan included a complete blood count, serum chemistry, computed tomography (CT) scan and cytology and culture of the external ear canal exudate. 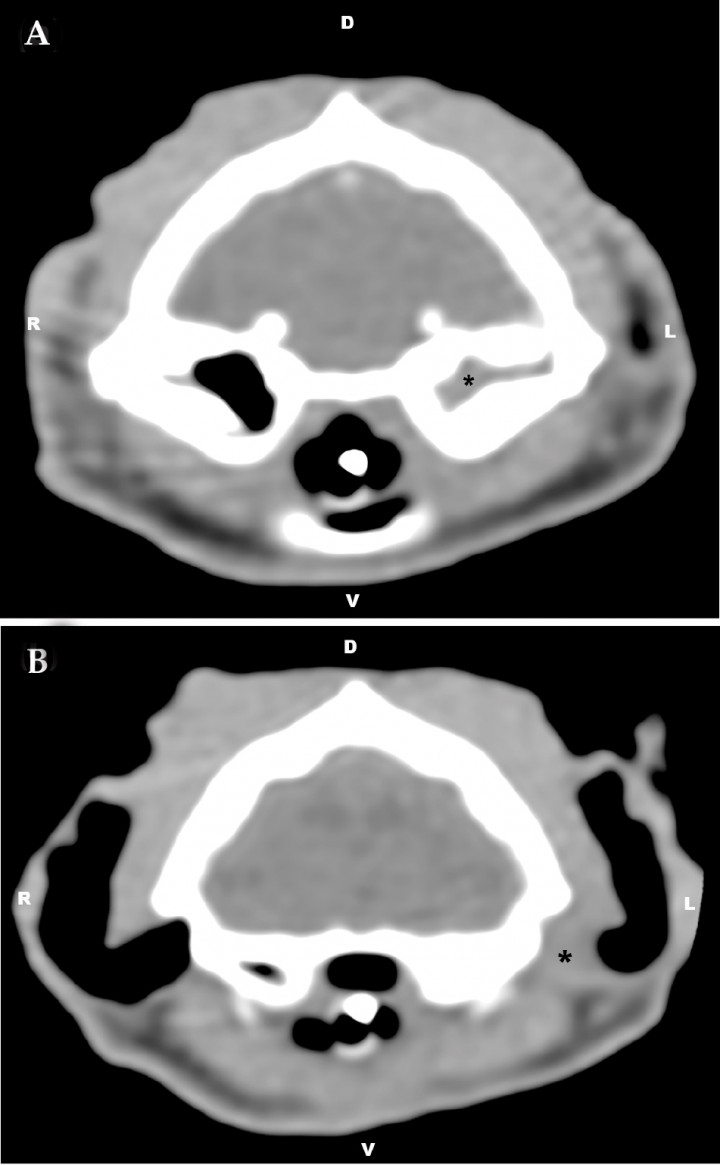 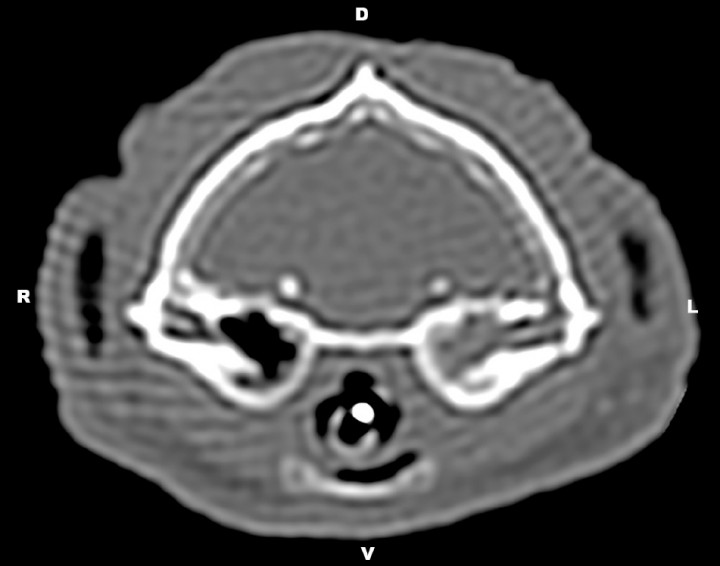 Microscopic examination of Diff-Quick stained impression smears collected from the external ear canal revealed numerous toxic neutrophils, coccoid bacteria and Malassezia -like forms. Antimicrobial and antifungal culture from the external ear canal revealed a growth of Staphylococcus spp. The owner declined further tests and a medical plan was elected. Treatment, based on antibiogram results, consisted of itraconazole 15 mg/kg PO once daily and amoxicillin-clavulanic acid 20 mg/kg PO twice daily. A week later the initial presentation the ferret was readmitted because of acute onset of seizures. The ferret arrived in status epilepticus and died one hour later. The owner declined to conduct necropsy.

In dogs and cats otitis media can occur via direct extension from otitis externa, hematogenous spread, extension of infection from the nasopharynx via the eustachian tube or inflammatory polyps.7,8 In human medicine, viral upper respiratory infections are commonly associated with episodes of acute otitis media mediated by eustachian tube dysfunction. The ferret’s eustachian tube functions in a manner similar to that of human beings,9 nevertheless in this case the owner did not observed any previous symptoms related to respiratory disease and none of the persons living in the house have had flu.

Otoscopic diagnosis of OMI can be complicated by chronic remodeling of the external ear canal (hyperplasia, stenosis) that impedes visualization of the tympanum and sampling of the middle ear cavity. In addition, the presence of an intact or grossly normal tympanic membrane or normal appearing external ear canal does not exclude the possibility that OMI may be present.3

The cytological examination of the external ear canal exudate showed a clinically significant number of inflammatory cells, bacteria and yeast that helped to diagnose the otitis externa,11 and the culture of the exudate revealed growth of Staphylococcus and Malassezia spp. Thus, even though the most common aetiology in otitis externa is ear mites,12 in this ferret, extension from otitis externa was feasible. However, without myringotomy a definitive diagnosis cannot be achieved.3

The choice of systemic antibiotics for treating the middle ear compartment is preferably based on culture and susceptibility testing. Lavage of the bulla is highly recommended in dogs and cats with inflammatory exudates.3 Furthermore, osteotomy of the bulla is a widely accepted surgical treatment for end-stage otitis externa, otitis media, and masses confined to the middle ear.7-13 Due to the owner’s concerns about the anesthetic risk and post-surgical care otoscopy, myringotomy and tympanic bulla flushing were confined. In addition, these clinical procedures were not practical from a clinical perspective due to the narrow diameter of the external ear canals in ferrets and enhanced due to inflammation as well.13

Advanced diagnostic imaging techniques are essential in evaluating neurological patients to locate the lesion.4 Traditionally, diagnostic imaging of the bulla has been restricted to radiography. Interpretation of skull radiographs can be challenging because of superimposition of other structures over the area of interest. Radiographic changes such as a thickened, irregular bulla, and soft tissue opacities within the lumen of bulla are commonly seen with otitis media. Radiographic changes may be slow to develop with acute infections and may not be visualized for several weeks. Radiography is not very sensitive for the diagnosis of otitis media with false-negative radiographic findings seen in 25% of confirmed cases of otitis media patients. Thus, abnormal radiographic findings of the middle ear might not be a reliable indicator of whether surgery was necessary.14,15 CT and magnetic resonance imaging (MRI) have been used to assess the tympanic bullae. Both CT and MRI provide cross-sectional images, removing the problems associated with superimposition, and superior soft tissue contrast.14,15 CT provides excellent images of bony structures and is indicated where osseous changes are of greatest diagnostic importance. MR is superior in imaging soft tissue components including intra-labyrinthine fluid. It has been suggested that more than one of these imaging techniques may be required in order to make a diagnosis.4 CT imaging has been reported to be more sensitive than radiography for evaluation of the bullae in cases of OMI and is particularly useful for cases of otitis media with reported positive predictive value of 93% and negative predictive value of 80%.3,13,15 CT of the tympanic bullae in cases of OMI reveals fluid or soft tissue accumulations within the bullae, and often secondary reactive or remodeling changes of the middle and external ear (sclerosis, thickening, or lysis of the bullae, calcification or stenosis of external ear canal), depending on the chronicity of the lesion.14 In our case, CT examination revealed an accumulation of soft-tissue dense material within the left tympanic cavity and the horizontal portion of the left external ear canal as well as mild sclerosis of the wall of the tympanic bulla. Thus, otitis externa with concurrent otitis media were suspected. In this case we found that the CT exam was easy and fast to perform and allowed us to confirm OMI diagnosis. Unfortunately, MRI was not available in our institution at that time.

One limitation in this case was the lack of intravenous contrast media administration. The use of contrast media in CT may lead to contrast-induced nephropathy, especially in patients with preexisting renal impairment.16 In this patient, blood analysis indicated azotemia and therefore the use of iodinated contrast media was contraindicated.16

Based upon this case report, the following conclusions were drawn: (i) to the authors’ knowledge this is the first case report describing the onset of a peripheral vestibular syndrome resulting from an OMI in a ferret, (ii) OMI should be included in the differential diagnosis of peripheral vestibular syndrome in ferrets, (iii) CT imaging is a useful tool in the diagnostic plan of vestibular disease in ferrets, as well as quick and practical diagnostic technique in order to rule out otitis media in the ferret.